Earlier on Friday, we carried a report from Calciomercato explaining that Tottenham Hotspur have ‘tested the ground’ with Cagliari for Nahitan Nández.

It was also stated the midfielder is ‘waiting for signs’ from the north London club. That seems to have arrived if a report from today’s edition of La Nuova Sardegna is to be believed.

The newspaper local to Cagliari has a report on the 25-year-old, and the headline says the player ‘prepares his suitcase’ to leave the Serie A side.

Within the report, it’s said Spurs are ‘serious’ about the Uruguay international and he’s now ‘close’ to joining the Premier League side.

Tommaso Giulini, the president of the Italian club, was hoping to cash in €36m [his release clause] from the sale. However, Nuno Espírito Santo’s side have ‘no intention’ of paying this fee to sign the player. 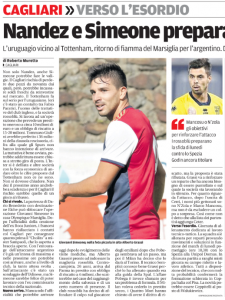 Fabio Paratici made contact with Cagliari yesterday to discuss the South American.

It’s claimed ‘work is underway’ to bring Nández to the English capital for an ‘onerous loan of around €10m euros and a redemption obligation of €15-20m’.

The transfer negotiations are underway and La Nuova Sardegna suggest the deal to take Nández to Spurs could be closed soon.