On July 30th, Sport reported that Manchester United have asked Yerry Mina to wait as they will make an approach for him if the Red Devils fail to sign Leicester City’s Harry Maguire.

The England international does not want to push for a move to Old Trafford. However, if he ends up joining Jose Mourinho’s side, the Foxes will then make an approach for the Colombian international.

Sport now claims the 23-year-old’s future lies in the Premier League. He is currently on vacation and is expected to join his new club on his return from the break.

The centre-back is not the United manager’s first choice, but is viewed as a ‘great alternative’. They have already contacted a Barcelona official to start the negotiation for the ex-Palmeiras man.

In the next 48 hours, the Red Devils could formalise the offer, which could reach €40m. 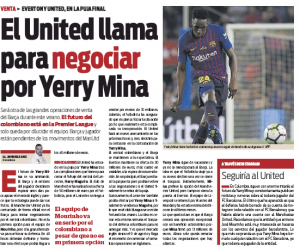 Sport mentions Mina ‘prefers the option of Manchester United’, but will not close the door to Everton, who are also interested in the player.

The Toffees have made an offer of €30m plus €4m bonuses for Mina and if United end their interest in the player, Marco Silva’s side could return to negotiate for the defender.