Mundo Deportivo believe Nelson Semedo is all set up to snub Manchester City and sign for Juventus instead.

The fullback had preferred the idea of joining Pep Guardiola’s side as opposed to being part of the Barcelona deal for Inter Milan’s Lautaro Martinez. Such a stance was reported for a few days, with the Catalan media saying Semedo ‘preferred’ the option to sign for Manchester City over going to Inter.

Then the idea of Barca signing Miralem Pjanic arose, and Semedo was immediately suggested as part of that deal. The Portugal international views Juventus as a ‘big one’, presumably meaning he feels they’re one of the biggest clubs in Europe and on a higher level to the Premier League side.

Of course, deals involving other players are very complicated, and Juventus appear to be considering several right now. There’s every chance the Turin club shelve this idea and move to something else. 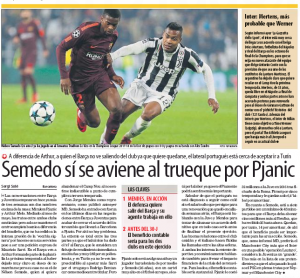 That would give Manchester City another chance.

However, if it’s true he dumped them so quickly when learning of Juve’s interest, the English club may well now think twice about their own interest.