It’ll be no surprise that this week’s edition of SportBild has a transfer article on Timo Werner.

The German magazine have been pushing the story for more than a year, often with Premier League clubs, mainly Liverpool, thrown into the mix.

For a long time it’s almost been like a sales pitch, with it being explained how the RB Leipzig striker would fit perfectly into Jurgen Klopp’s system at Anfield. However, it’s been pointed out on more than one occasion that Werner would find it tough getting into the Liverpool starting eleven, and could therefore look at a move elsewhere.

From the German perspective it hasn’t really been pushed that Liverpool are working on a transfer, and it often gets twisted when it arrives back in England.

This week’s edition brings more of the same, it’s claimed Werner ‘would prefer to go to Liverpool’, with Manchester United and Chelsea credited with interest.

Werner has a fixed transfer fee this summer of €55-60m. 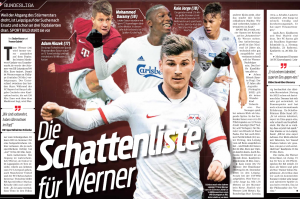 RB Leipzig sporting director Markus Krösche is quoted as saying: “It is quite normal for Timo to become the focus of other clubs. But that doesn’t give me sleepless nights. We are prepared, we have alternatives in mind.”

Again, there’s no impression given that Liverpool are actually making any moves, or that they even plan to do so, and there’s no claims of serious advances from anyone else either.

SportBild believe a summer transfer is ‘likely’, yet there’s no concrete indication of to where.