Barcelona have been chasing Eric García for more than a year and a deal couldn’t be materialised in the last two windows because they failed to reach an agreement with Manchester City.

The 20-year-old’s contract expires on June 30th and he made it clear in August 2020 that he had no plans to sign an extension.

The defender has been clear about his desire to return to the Catalan club and Sport now claim he’s paying the price for that.

Although the centre-back enjoyed minutes in the first half of this season, he’s been restricted to only three appearances in 2021 and two of them came in the FA Cup against Cheltenham Town and Swansea City.

That’s partly because Guardiola has several options to pick from in the heart of the back four and it’s also difficult for the Citizens manager to justify picking the Spaniard, who wants to leave, over other options. 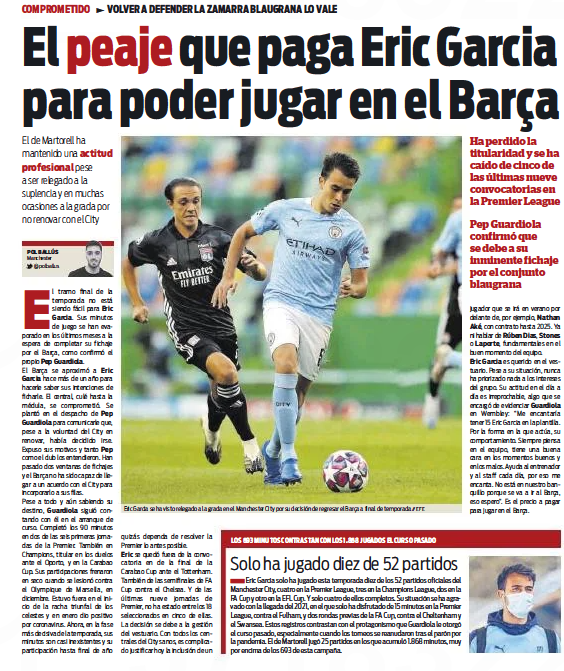 Therefore, Guardiola didn’t give his compatriot an opportunity in the EFL Cup final win over Tottenham Hotspur and also during the FA Cup semi-final defeat at the hands of Chelsea.

Despite the current situation, the report adds the player has displayed exemplary behaviour in training sessions.

Over at Mundo Deportivo, it’s claimed García will be a Barca player next season, if ‘nothing goes wrong’.

That’s because the player’s agent and the La Liga side are in the ‘final stretch’ of the negotiations, and there’s ‘optimism’ from both parties over reaching an agreement.

The relationship between the two parties is ‘fluid’ and they are close to reaching an agreement over summer transfer. Only final details [mostly economic] of the deal need to be sorted out.

Mundo explain García will arrive at the Camp Nou on a free transfer in the summer, but Ronald Koeman’s side are in no hurry to announce his transfer due to the respect he has for Guardiola and City.

The English club are in contention to win the Champions League and are firm favourites to lift the title this season.

Therefore, neither García, nor Barca want to rush into making a quick announcement.