Wolverhampton Wanderers took Jesús Vallejo on loan from Real Madrid before the start of the season, but the defender’s temporary stay at Molineux was cut short in January as he completed a loan move to Granada the same month.

The 23-year-old gave an interview to Spanish newspaper Marca and discussed various topics, including his short spell in England.

When asked if held talks with Nuno Espírito Santo before joining Wolves, the centre-back said: “Yes, in fact he called me in the summer and told me he was very interested in me going with them. Real Madrid also recommended it to me and I was clear about it.

Unfortunately for the player, things didn’t work out well at Wolves as he made only two appearances (only start) in the league.

Despite a lack of opportunities at Wolves, Vallejo stressed he was professional, but he failed to explain the reasons behind his struggles with the English club.

“Then, for whatever reason, I could not count on those minutes, but I have always been correct. I have respected all the decisions and it is something I am proud of,” he explained.

“I have always been the first to train and the first player to rejoice when the team had good results. In that sense, I am proud to have been a professional from day one to the last.”

Even though things didn’t work out well on the pitch for Vallejo at Wolves, he has still managed to take some positives from his short spell with Nuno’s side. 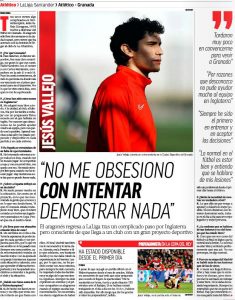 “I adapted very well to everything. To the city, to the club, to the language, I went in the afternoon to work with a Scottish physical trainer with whom I spoke in English,” the Spaniard said.

“For reasons I don’t know, I haven’t been able to help the team very much, but I’m positive. I learned many things there and I have been prepared and available in every game and in every training.”