Home Europe ‘Could go to Tottenham’ – Player quite keen on move to Spurs,...
SHARE

Barcelona must lower their wage bill before bringing in reinforcements in January and the exit of Philippe Coutinho, the club’s current top earner, will help them a lot in this regard.

On Tuesday, reports in the British press stated the attacking midfielder has been offered to Tottenham Hotspur.

The 29-year-old joined the La Liga side from Liverpool in January 2018 and still has a market in the Premier League due to his impressive spell with the Reds.

Reports of Coutinho being offered to Antonio Conte’s side have reached Spain and Mundo Deportivo have decided to take a look at these claims.

The newspaper states that from the environment of the Brazil international, there is ‘no news of these [to Tottenham] movements’. 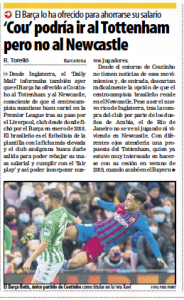 Spurs were ‘already very interested’ to take the player on a loan deal in 2019, when Mauricio Pochettino was in charge at the north London club.

Mundo say Coutinho isn’t keen on joining Newcastle United, but would ‘attend to a proposal’ from Spurs ‘with different eyes’.

In other words, the South American ‘could go to Tottenham’, but so far, there has been ‘no news’ of their approach for a transfer in January.