In his debut season in England, the 23-year-old has been the first-choice midfielder for Pep Guardiola in all competitions. He has made 38 appearances so far, which includes 33 starts.

The Spaniard gave a lengthy interview to AS and spoke on various topics, including the Champions League clash against Real Madrid and his adaptation to the Premier League.

With regards to the latter, Rodri said: “The adaptation, the challenge and the motivation have to be from inside, knowing the great bet the club has made for you. I never thought you could pay that amount (€70M) for me.

“It was a very difficult and painful decision, but I wanted to bring my best. I came to a winning team and I had to make room for myself, gain the trust of the coach and know, above all, what I could give to the team.”

“When you surround yourself with these players, everything is easier, but you are always penalised a little to go to a new league, to advance blindly in the first matches because you do not know how the rhythm is.

“It took me a couple of weeks to get the hang of it, but little by little I got the rhythm of both the club and the Premier League.”

Rodri has played under the orders of Guardiola and Diego Simeone in the last two years. The ex-Barcelona boss is known for his possession football, while the Argentine prefers a more pragmatic approach. The player, however, sees similarities between the two managers.

“Many people think that they are opposite poles, but I see similarities: they are very intense, very hard-working, they make you do your best every day, they take training sessions as if it were competition because it is an opportunity to learn,” he explained.

“From there, each one has his way of understanding football and transmitting it, and the latter seems to me the most difficult. I am lucky because the work of both of them has completed me as a player.”

City’s last summer signing spent six years at Atlético’s academy before moving to Villarreal in 2013. He rejoined Los Rojiblancos in 2018 and a year later, he left them for the English side.

When quizzed if he has dreamed or thought about returning to the Madrid based club, Rodri explained: “If I’m honest, I don’t know where I will be, like when I went out as a child, I didn’t think I would return.

“The conditions have to be met for this, but in its day, it was a dream to return to where I always dreamed of debuting, which is my home.

“You are here and there, but you feel the colours [of the club] in one way or another. It was not easy to get out. I never rule out going back because it is a unique club and, when you are there, you see its size, that fanbase…” 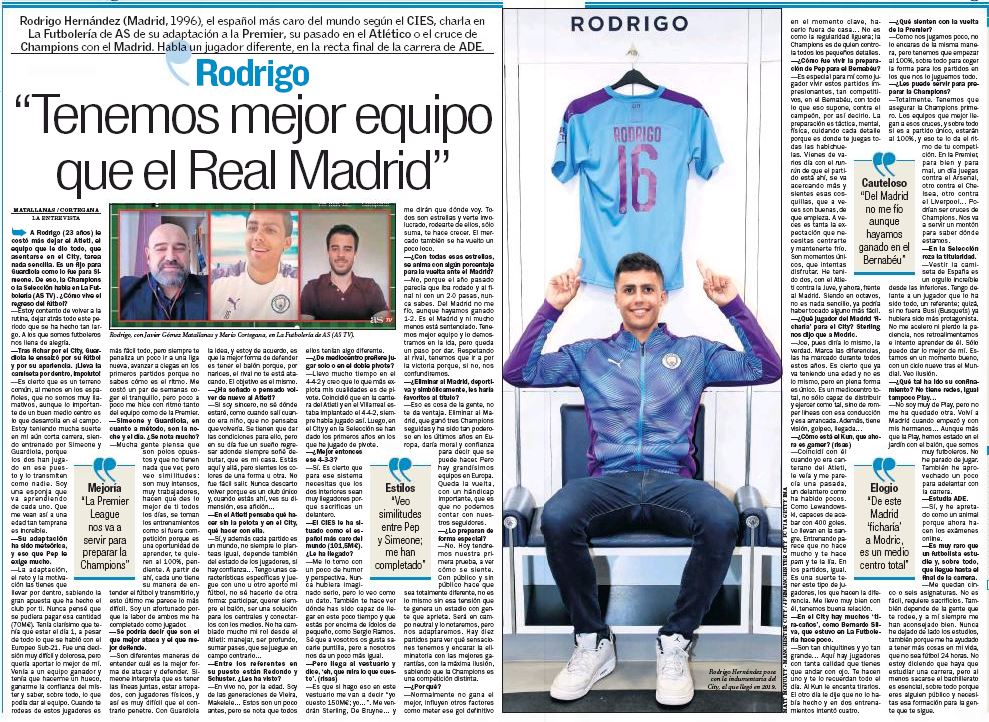 City’s second leg tie against Real Madrid has been postponed due to the Covid-19 crisis.

Zinedine Zidane’s side suffered a 2-1 defeat in the first leg at the Bernabéu, but Rodri says his club are still not favourites to progress to the next round of the Champions League.

“No, because last year it looked like it was sure shot and, in the end, you don’t go through even with a [Atlético’s] 2-0 lead [against Juventus], so you never know,” Rodri stressed.

“I don’t trust Madrid, even though we won 1-2. It is Madrid and it’s far from over. We have a better team and we showed it in the first leg, but there is one step to take. Respecting the rival, we have to go for the victory because, if not, we will get confused.”

The return leg is likely to take place in August, once the league season is completed across Europe.