Home Premier League Arsenal ‘You are nobody’ – Player on learning ‘so much’ training under Thierry...
SHARE

Stephy Mavididi was at Arsenal for seven years, but he failed to make it to their first team.

The Gunners allowed the striker to join Juventus in 2018 and after having made only one senior appearances for the Serie A side, his time in Turin came to an end earlier this year.

Having failed to impress at Juve, the Old Lady sold him to Montpellier in June. Since arriving in France, the 22-year-old has scored an equaliser against AS Monaco and a winner against Saint-Étienne.

Mavididi is a big fan of Arsenal legend Thierry Henry and in a lengthy interview with today’s edition of L’Equipe, the striker expressed his love and admiration for the ex-Barcelona man.

During his time at the north London club, the player had an opportunity to train under  Henry. The Ligue 1 attacker has now talked about his first meeting with his ‘idol’.

“I must have been 17 or 18, and I was already training with the first team, alongside Özil, Cazorla, Wilshere… One of the coaches told him about me, this young striker who looked like him,” he said.

“He came looking for me, I turned and… I didn’t know what to say to him. He must have thought I was weird when he shook my hand (laughs).”

Henry is currently managing Montreal Impact and when asked what ‘kind of’ coach he was, Mavididi explained: “Very hard, very demanding.”

“One day, with my friend Chris Willock (today at Queens Park Rangers), we came back after the [2015] Under-17 World Cup. We did badly, including myself, when there was a lot of expectation around us.

“It was a month since we last saw our teammates, we were messing around, we were laughing.

“So, Thierry summoned us, Chris and me. He said to us: ‘You come in with a smile and you go about it peacefully after losing in the first round. You haven’t done anything in football, you are nobody. What if tomorrow everything stops for you? You have the chance to play at Arsenal, don’t let it pass’.”

Mavididi, unfortunately, never had the opportunity to represent Arsenal’s first team, but he admits the time spent training under Henry at Arsenal’s academy was valuable.

“It was like he understood me better than others. As if he identified with me. He knew where I came from, he too had gone through it. So, he knew when to be demanding and when to let me have fun,” he added. 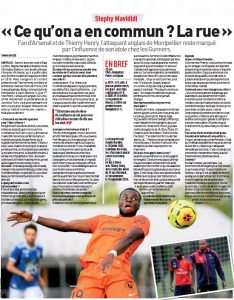 “I learned so much in such a short time with him. About life in general, the mentality to become a world-class player.

“What we have in common, him and me? It’s the street. When I had a one-on-one to play and I was passing, he would say to me, ‘Why don’t you kill him?’ He made me promise never to lose the street in me, never to change.”