Home Premier League Arsenal Mavropanos on Mislintat, and his desire to eventually make it at Arsenal
SHARE

Sven Mislintat was Arsenal’s head of scouting between December 2017 and February 2019, and during his time at the club, the centre-back was one of the players to arrive.

The German is now the director of football of the newly promoted Bundesliga side, and the 22-year-old admitted Mislintat was vital in signing for Stuttgart.

“Of course, he [Mislintat] also played an important role. But Stuttgart is a traditional club, have been champions five times, a club with an international reputation, even if we have to laboriously work our way up again,” he told Kicker.

The Gunners took the defender from Greek side PAS Giannina in January 2018, and he struggled with a groin injury in his full season in England.

After failing to get regular opportunists in the first half of the last season, Arsenal allowed Mavropanos join 1. FC Nürnberg on loan at the start of this year.

Prior to joining the second division German club, there was interest from Werder Bremen and FSV Main.

When asked why he turned down top tier clubs for Nürnberg, he said: “I had groin problems for a year and a half.

“It’s nowhere [current situation] near comparable. Back then it was a long period of suffering, after which it was important to play a lot to get back into the rhythm of the game. That worked out best in Nuremberg.”

Mavropanos was in the second division last term, and will play in the first division next season. Although his goal is to play for Arsenal, he knows he needs to improve to play in the Premier League.

“If it’s up to me [playing for Arsenal], gladly, but who can predict that for sure? In any case, I hope that I can develop further to get closer to this goal,” Mavropanos stressed. 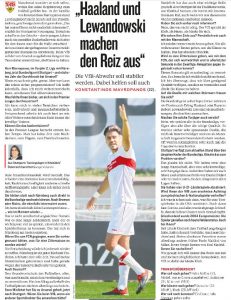 “I can improve in many areas, individually and in terms of team tactics. Accordingly, I also work hard on myself. Everything else is ultimately decided by the respective trainer.”

“The pace in the Premier League is extremely fast. There is no time to think, to hesitate, to take a deep breath. You will be punished for lack of concentration.

“This requires an immense ability to concentrate, responsiveness and a quick grasp of things. I can certainly learn something new here.”