Home Europe Player ‘has an offer from Liverpool’ – Club ‘won’t do anything crazy’...
SHARE

Barcelona will ‘not do anything crazy’ to sign Mohamed Salah from Liverpool this summer, but he is a player on their list of options.

That’s according to Sport, who say the Egyptian fits the profile of player that the Catalan giants are looking for.

Several reports over the last week or so have put Salah firmly in Barcelona’s sights, with it explained that he is an alternative to Erling Haaland, who is increasingly between Real Madrid and Manchester City.

Sport say similar, stating that Barcelona are ‘studying alternatives’ to Haaland and for someone to replace Ousmane Dembélé should he leave as expected.

Salah ‘fits the profile’ of player they are looking for as he is a ‘top player who can give a qualitative leap’ to the team but is also ‘adaptable’ as he can play as a winger and a false nine.

He’s currently ‘studying’ what to do with his future as his contract with Liverpool is set to expire next summer, and he has not made a definitive decision on what to do moving forwards.

He’s nearly 30, and so this is a ‘key moment’ for him. Does he stay at Anfield, and he has ‘an offer from Liverpool’ to do so, or move elsewhere for a last big contract?

He’s waiting to see what offers he receives, but Barcelona are yet to make a ‘firm proposal’ and will ‘not do anything crazy’ to secure the Liverpool star. 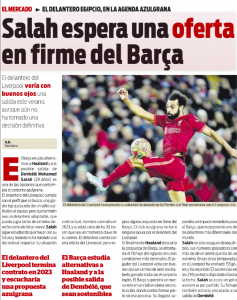 The Catalans are themselves waiting to see what happens with Haaland, and if he dismisses the offer they’ve made, the signing of Salah would be dealt with ‘on more earthly terms’.

Salah has made it clear he would ‘welcome a change of scenery’ after winning everything on Merseyside, and Barcelona would be a new challenge for him.

They’d more than welcome the forward and the goalscoring numbers he would bring but are only looking at him as an alternative to Haaland or as the replacement for Dembélé.

Thus, they need to know definitively what’s happening with both of those players before making a firm move to sign the Liverpool star.