Home Europe Player now ‘a step away’ from signing for Man City – should...
SHARE

Joao Cancelo is now very close to signing for Manchester City, according to claims coming from Italy on Thursday.

Tuttosport, a Turin newspaper, report the Juventus fullback is ‘a step away’ from signing for the Premier League champions.

The push for the move is said to have been led by manager Pep Guardiola, and it’s believed a transfer should be completed within the next week.

Cancelo is expected to make the move to England for €50-55m, with the exact amount depending on bonus payments being activated in the future. 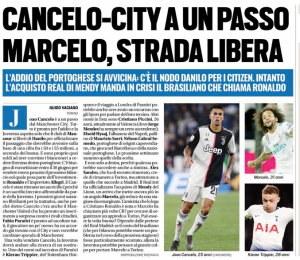 Tuttosport state ‘everything is ready for the farewell’, but they then point out that actually it isn’t. Manchester City are said to be waiting to ‘get rid of’ Danilo before formalising the arrival of the Juventus player.

If that’s true then it may be hard for all of this to be sorted out within the next few days, as there’s no claim of Danilo being on the verge of a move.

Manchester United interest in Cancelo is also referenced, although it doesn’t look like that’s going anywhere.