Chris Smalling not training with Manchester United has prompted many claims in Italy that a transfer to AS Roma is now imminent. That’s a fair assumption to make, yet a lot of the reports are conflicting, especially when it comes to price.

Friday’s edition of Gazzetta dello Sport says the defender is now ‘one step away’ from Roma. The Serie A club have made a ‘new offer’ of around €12-13m and Smalling himself is said to have told Manchester United he wants the move to happen.

Over at Corriere dello Sport they say Smalling’s transfer is now ‘defined’, yet offer nothing else on the situation.

Il Romanista have a lengthy article, which feels like it’s just fleshing out the Gazzetta claims. They believe it’ll be ‘a matter of hours’ or ‘a few days maximum’ before the transfer is completed.

However, they base this on ‘clues’, which largely rests upon Smalling not being required to train at Carrington. 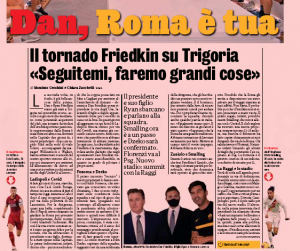 All the claims feel very much based on circumstantial evidence, yet it’s a fair assumption to make.

Manchester United aren’t going to allow a player to sit out of group training unless there’s a good reason for it.