Home Europe Player ‘not really won over’ by Tottenham’s plans for him – Spurs...
SHARE

M’Baye Niang’s summer transfer plans are having a bit of a wobble.

Monday’s edition of L’Equipe explains the 25 year old has long been looking towards a transfer this summer. Tottenham have been linked with the striker several times, however, the French newspaper states Niang has ‘not really been won over’ by Spurs.

That’s not because he doesn’t fancy the London club or the Premier League, it’s down to him being aware he’d be nothing more than a back-up to Harry Kane at Tottenham, and doesn’t feel so excited at the prospect.

Instead, the Rennes player has been eyeing up a move to Marseille. Indeed, he spent quarantine in the city with his partner, and had begun to look at properties in the area.

With Marseille’s finances not looking the best right now, that plan isn’t so concrete. Rennes are looking for at least €20m, and Niang isn’t convinced that’s affordable for OM. 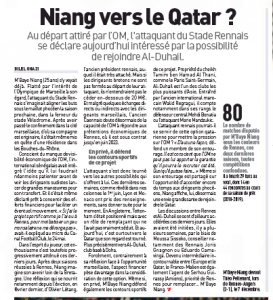 Now he’s considering a move to Qatar with Al-Duhail, which seems to be a surprise option, and L’Equipe suggest it could be an effort to put pressure on Marseille.

It may be time again for Niang to consider Tottenham, because being a back-up option at a big Premier League club is surely just as tempting as anything Al-Duhail can offer.