David de Gea was subjected to criticism after Spain suffered a 1-0 defeat against Ukraine in the UEFA Nations League clash on Tuesday.

Some Spanish journalists have urged Luis Enrique to drop the Manchester United goalkeeper from the national team.

The former Barcelona manager refused to blame the 29-year-old for Spain’s latest defeat to Ukraine.

“You can always do more, but blaming De Gea is already a bad habit. If David is blamed for a game like this, switch it off and we’ll leave,” he said.

The newspaper points out some of the mistakes the former Atlético Madrid man has made since the 2018 World Cup in Russia.

They further add he has not ‘lived a placid year at Manchester United’, which would suggest his performance for the Old Trafford club for the last year or so has not been up to the mark.

Mundo adds the English media ‘did not forgive him’ for his errors in the Premier League and FA Cup.

De Gea’s mistake in Kyiv has generated a ‘debate’ as to who should start for Spain. However, Mundo states the United player ‘continues to enjoy’ Enrique’s trust, even if the national team manager has other options in the same position. 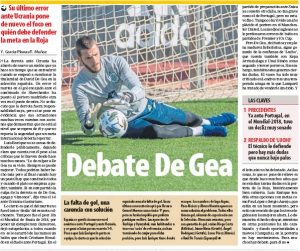 The Spaniard has conceded 11 goals in three matches for United and he will be put under test again when Ole Gunnar Solskjaer’s side take on Newcastle United this weekend.

De Gea will be hoping his side collects three points against the Magpies and he can finish the match without any errors so that there’s no need for anyone else to defend him.