Another day, another update from the Portuguese media regrarding Marko Grujic’s situation at Liverpool.

The midfielder was seen training with the Reds in their pre-season camp in Austria, but according to newspaper Record, that still doesn’t mean he’s staying in Jurgen Klopp’s squad.

The outlet writes that Liverpool want to sell Grujic, while Porto are interested in the transfer and the player is keen on finding a move as well.

With all parts wanting the same thing, the problem continues to be the price, as the Dragons want the Reds to drop the requested amount, which is currently of €17m. 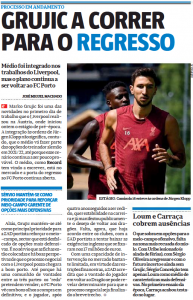 It’s claimed that Grujic wants a move to a place where he can find some stability in his career.

That’s why the destination could be Porto, where he had a loan spell last season and managed to make 39 appearances.

So the Dragons now believe that his wish can be crucial for Liverpool to accept a deal for the transfer this summer.