On February 21st, we covered a report from Mundo Deportivo, who discussed the five potential striker targets for Barcelona in the summer.

One among them was Maxi Gomez and the Celta Vigo star was reported as the ‘favourite’ for the Bluagrana.

Journalist Miguel Rico, writing on the back page of today’s edition of Mundo Deportivo takes a look at situation linking the Uruguay international with a move to Camp Nou.

He once again claims the 22-year-old was identified as the leading candidate to be his compatriot Luis Suarez’s successor at the Catalan club.

Gomez has scored nine goals and registered five assists in 24 league games and even though he has impressed for Celta this season, Rico claims he is ‘not good enough’ to join Ernesto Valverde’s side.

Another report from Rico also explains that Valencia’s Rodrigo has been added to the list of summer transfer targets, but the operation to sign the 28-year-old may not be easy. 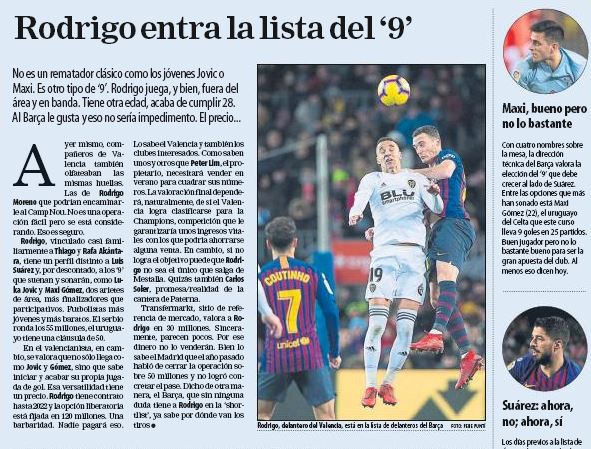 Rodrigo’s contract with Los Che runs down in 2022 and he has a €120m release clause, which no club is willing to pay.

Valencia owner Peter Lim will have to raise funds from sales in the summer in order to balance the books and the final valuation of figures will depend on whether they qualify for next season’s Champions League.

Transfermarkt value Rodrigo around €30m, but that is too low, especially considering the fact that Valencia rejected €50m bid from Real Madrid last summer. He has made it to Barcelona’s summer ‘shortlist’ and they want to be aware at what price his employer could sell the attacker.