Nicklas Bendtner isn’t exactly having a hard time of it since leaving Nottingham Forest and joining Rosenborg. The Danish media have covered Bendtner’s Nottingham Forest exit closely, believing the move to the Norwegian league is another step down in the striker’s career.

However, things are looking sunny for Bendtner, with Danish newspaper Ekstra Bladet having a feature in their Thursday edition on the player’s first few days with Rosenborg. The temperature at the club’s Trondheim home is today -1C, in Nottingham it’s 11C, but on Bendtner’s warm weather training trip in Malaga it’s in the mid twenties.

Ekstra Bladet say Bendtner is the ‘King of Norway’ and they’re now producing a more positive slant on the player’s Nottingham Forest exit. If it means one of their reporters gets to follow Bendtner around Malaga then it can’t be a bad thing.

The Danish newspaper even compare a topless Bendtner walking around Rosenborg’s Malaga training camp to Daniel Craig’s James Bond walking out of the sea in Casino Royale. 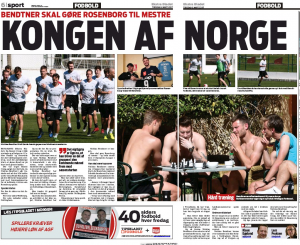 everyone win. Nottingham Forrest have a player off the wage bill, one who didn’t fit Gary Brazil’s plans, and Bendtner is being given special treatment as the star of his new team.

When the reality of Trondheim bites, it has to be hoped the optimism can continue.