Manchester United have been linked with Ronald Araujo since it became clear Barcelona weren’t offering the level of renewal the defender and his agent were looking for.

Whether that’s down to genuine interest or if the player’s representatives have been using Manchester United’s name to pressure Barca hasn’t been certain. Araujo’s increasingly impressive displays have showed why Red Devils interest could be genuine, but they’ve also sent a message to Barcelona about a renewal being urgent.

Given the player’s contract expires in June 2023, the Blaugrana either have to secure a new deal this summer or look at the possibility of a sale, so they can avoid losing him for nothing a year from now.

Mundo Deportivo report things are looking a bit better for Barcelona right now, despite Manchester United making a ‘much higher financial offer’ to the player. 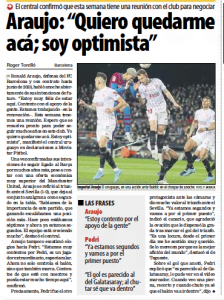 Following Xavi Hernandez’s side beating Sevilla at the weekend, Araujo said he wants to stay where he is, regardless of where the renewal negotiations stand.

That’s a boost for the Catalan side, and a blow for Manchester United and other clubs who have been interested in the Uruguay international.