Home Europe Player ‘marches’ to West Ham – Transfer given as a sure thing,...
SHARE

Marca are treating Pablo Fornals to West Ham as a sure thing, so much so they don’t seem bothered enough to write too much about it anymore.

On Monday we covered claims from Spanish newspaper AS that the Hammers were pushing ahead with signing the Villarreal player, and then Marca pushed everything further forward.

In their Wednesday edition, the Spanish newspaper make it very clear – They believe a deal is done and Fornals won’t play for Villarreal again.

The attacking midfielder ‘goes to the Premier League’, with the €27m fee mentioned again.

There have been slight variations on the fee around Spanish outlets but it’s not thought to be a problem.

On Tuesday, Italian journalist Marcello Calvano spoke to a radio station about the Spaniard’s transfer. His aim was to explain Napoli weren’t losing out, because they haven’t made a recent effort, but he also managed to back up the West Ham claims. 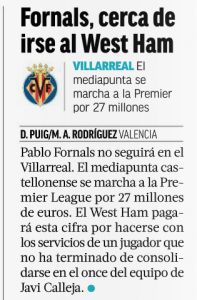 confirmed there’s a €27m offer from West Ham, and now negotiations will begin to reach an agreement with the player. The last time January showed up was around January, but there were no further contacts.”

As far as the Spanish media goes, there’s not really much more out there today, with everything moving on to other rumours.