Home Europe Player to have Man United medical ‘in next few days’, announcement on...
SHARE

After all the stories reporting Manchester United’s deal to sign Diogo Dalot from Porto on Wednesday, the Portuguese press brings a few more details about the transfer today.

With so many fans asking when the move will be announced, patience may well be needed, because the local papers still can’t really set a date.

As A Bola claims the agreement is totally reached, they state that the player will be having his medical ‘in the next few days’, and will then sign a five-year contract with the club. That’s why the announcement should be made ‘soon’, with no exact deadline.

The transfer is creating a bit of controversy among Porto fans, as they don’t like the way Dalot is leaving. He’s being accused of rejecting several renewal offers, mostly because of what the papers said between Tuesday and Wednesday. Porto have been playing the victim due to the player’s low €20m release clause and a contract expiring in 2019.

As we pointed out in the past couple days, the club didn’t expect him to leave so soon, otherwise they wouldn’t have sold Ricardo Pereira to Leicester City this month without putting up more of a fight. 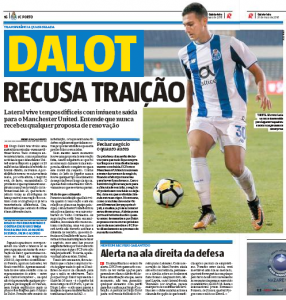 Dalot has now been attacked on social media over the Manchester United claims, and newspaper Record brings an interesting story saying the youngster may be innocent in the whole thing.

According to the newspaper, Porto only started talking about a renewal after Pereira left for Leicester City, which happened in mid-May.

When Porto met Dalot’s agent, they heard that the youngster already had offers to leave, and the Dragons didn’t even bother offering him a new contract at that stage. So contrary to reports saying the player kept postponing his renewal, he actually never heard about a new contract.

As Dalot has been raised at Porto, he doesn’t want to cause the club any harm or leave on a sour note. That’s why it’s claimed one of the few demands he’s made to Manchester United iss to pay Porto more than the €20m release clause. 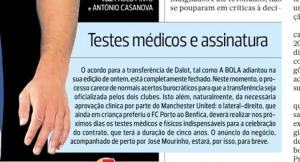 Although Record claims that this fee agreement is still to be done, A Bola says that the transfer fee should reach €24m.

As we covered yesterday, and Record insists today, Man United are finding an agreement with Porto now because the release clause could only be triggered in July.