Home Europe Player makes it clear he fancies being at “top club” Celtic next...
SHARE

Odsonne Edouard joined Brendan Rodgers’ Celtic on a season-long loan deal from Paris Saint-Germain last summer. The forward has scored 11 goals in all competitions and has won the League Cup and Scottish Premiership with the Bhoys. He is also on course to win the Scottish Cup on 19th May.

After the initial struggle to adjust in a new country, Edourad managed to have successful season under the former Liverpool manager.

The 20-year-old has expressed his desire to continue with Celtic beyond this season. Speaking to French newspaper L’Equipe, Edouard explains was “flattered” when Rodgers said the Frenchman was one of the “greatest talents” he has worked with.

Edouard also had kind words for his current manager as he believes his overall game has improved under Rodgers. In addition to this, the Northern Irishman has given the player a “lot of confidence” and therefore he wants to continue with Celtic in order to show what he is worth.

“I am happy at the club, with the team, the coach. He has given me a lot of confidence. The aim is to stay here. For me, this would be the best option,” Edouard told L’Equipe. 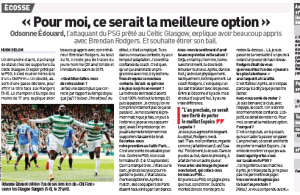 “It’s a top club with a top coach. He will help me with my development. It would be a pride for me to wear the Es­poirs (France U21) jersey next season. I want to show what I am worth.”

Celtic want to keep the player, he wants to stay, and now it’s time for negotiations with PSG and Edouard’s agents to find the right kind of deal.