Last month, reports from Spain suggested that Manchester City have submitted an offer for Rodri and was close to joining them.

Atletico Madrid, on the other hand, are planning to retain Rodri, which is why they are willing to offer him a new deal to increase his wages and also his buyout clause.

The midfielder has a €70m release clause in his contract at Wanda Metropolitano, meaning the Premier League winners don’t have to negotiate with Diego Simeone’s side and must only convince the 22-year-old of the transfer.

Monday’s edition of AS once again relays the domestic treble winners have submitted an offer to the former Villarreal man and only his signature is missing for the deal to take shape.

Unfortunately for Pep Guardiola’s side, the player has not made a decision on his future, despite studying various options for the last 15 days. 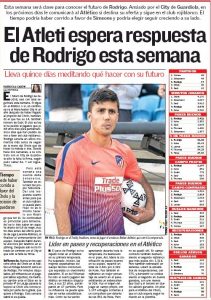 It’s almost certain that Rodri will decide this week as to where he will play next season.

The newspaper is of the belief that since this has dragged on for the last 15 days, the Spaniard could decide to continue with Los Rojiblancos.

AS state Rodri is now more close to staying with Atletico than packing his bags for City in the summer.

Rodri, on the other hand, also wants to make a decision on his future soon so that his employer can then plan for the future.

For Simeone, it is paramount the midfielder continues at the club, which has already been communicated to Rodri.