On December 27th, we relayed news from Italy that there are four clubs, Real Betis, Fiorentina, Bologna and Spartak Moscow are in the race to sign Manolo Gabbiadini from Southampton in the winter market.

It was further mentioned that the operation should cost potential suitors between €13m and €15m and it could be a loan deal with an option to buy.

Regarding the interest from the La Liga outfit, there is an update in Friday’s edition of Mundo Deportivo.

It is claimed that Betis are looking in the market to strengthen the attack and have ‘fixed’ at the Saints striker as a transfer target. 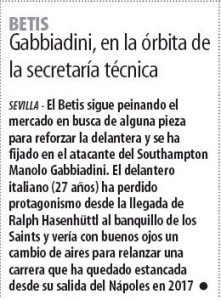 Since his successor, Ralph Hasenhüttl was appointed in December, the Italian came on as a substitute in his side’s defeat to Cardiff City and was left out of the squad for the next three matches.

The Catalan newspaper mentions that Gabbiadini has ‘lost prominence’ since the Austrian’s arrival and would see a move away from St Mary’s Stadium with ‘good eyes’ to relaunch his career at a new club.