Tuesday’s edition of AS reported Sevilla are keen to sign Roque Mesa on loan before the end of the month.

The Spanish club had been keen to sign Mesa back in 2016 but weren’t able to agree a deal with Las Palmas, and they then saw him move to the Premier League with Swansea City.

Mesa hasn’t been the success Swansea hoped him to be and a return to Spain doesn’t seem like a bad option, at least for the player.

Wednesday’s edition of Marca backs up the earlier claim and adds that Mesa is ‘loco’ to return to La Liga and sign for Sevilla, a club which would be a step up from Las Palmas and a chance to play European football.

Marca report Sevilla are currently negotiating a deal with Swansea which would see Mesa move on loan for the rest of the season. Sevilla want a purchase option in there, rather than a purchase obligation, giving them all the power on a deal. 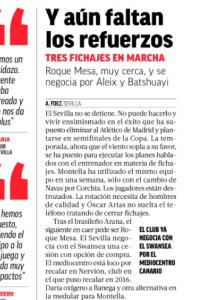 Sevilla don’t have the best record with loans and transfers generally, they’re ruthless when trying to get a good deal and Swansea City need to be careful they don’t agree to something they may later regret.

Any agreement needs to be committed to because anything thing done separately, and any assurances from Sevilla over a purchase, playing time, payments, is likely to be worthless unless in writing.