If you are one of the Chelsea fans out there hoping for Miralem Pjanić to sign, then you might have to wait a little longer.

Not because he doesn’t want to come, but because there’s a season to be finished and Maurizio Sarri needs him going forward for the time being.

Much like the Premier League season, Italy need to bring Serie A to a close as well as the Coppa Italia, and there will also be some Champions League fixtures to play out too.

All this means that any deal for the Bosnian is on hold for now, but an exit is still possible.

Corriere dello Sport explain on Monday that while Pjanić may have already said yes to the offer from Barcelona, his move is linked to Arthur’s exit, which isn’t a guarantee. 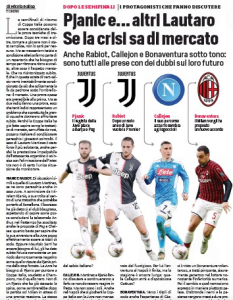 They then say that ‘in the meantime, he has also listened to the proposals from Paris Saint-Germain and Chelsea’, and has done so enough ‘to understand his adventure at Juventus might be reaching the end credits’.

To us, that sounds like what Frank Lampard’s side and that of Thomas Tuchel have offered him is enough to convince him to leave Italy after all these years and either try something new in England or return to Ligue 1, which he knows well from his time with Lyon.

All in all, this is going to be a strange window, and some of these sagas are going to seem interminable, so brace yourselves.