The Benfica loanees never felt so famous before. The Portuguese media continue to carry big coverage of their players in the Championship, and this Friday, it was João Teixeira’s turn to give an interview to a big newspaper.

Speaking to Record, the midfielder talked mostly about how he and his compatriots are adapting to life in England. 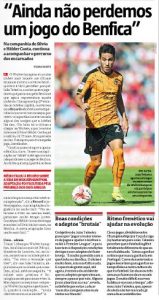 The newspaper called the city of Wolverhampton a village, and asked him how was it to change a city for such place: “That’s the sensation I had,” said Teixeira.

“The closest city is Birmingham and we even thought of living there. But then we started exploring Wolverhampton and we liked it.”

Funny thing is that according to the 2011 census, Wolverhampton has around 250k residents, meaning it would be Portugal’s fourth most populated city, so it’s a bit misleading to call it a village.

“I still haven’t had any accidents,” said the player when asked about driving in England.

The 22-year-old has also revealed his Portuguese teammates never miss a Benfica game since joining Wolves, and compared the club’s fans: “It’s very similar to what he had at Benfica. The club is very good, we don’t lack anything. What I like most here, so far, is really the atmosphere the fans make, always supporting us. Some of them approached me on the street.”

On his first month in the Championship, Teixeira commented: “I’m gaining the rhythm I’d never gain in Portugal. I run during all the game and that’s good to get physical form and another culture of what football is. In two or three weeks we’ve played five or six matches. It’s very hard, but I’ll get used to it with time.”