After failing to make his way into Zinedine Zidane’s plans for this season, Real Madrid allowed Jesús Vallejo to join Wolverhampton Wanderers on a season-long loan deal.

The centre-back has been restricted to 162 minutes of action in the Premier League and that came from two appearances. In addition to this, he has one more start to his name in the EFL Cup.

Three days ago, we carried a report from AS, who explained the La Liga side are ‘concerned’ about the 22-year-old’s situation at Wolves.

Saturday’s edition of Mundo Deportivo also claims the defender’s time in England has not been fruitful so far, which is why Real Madrid are planning to cut short his loan deal with the Wanderers. 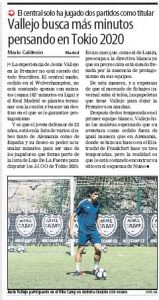 Clubs in Germany and Spain are interested in the player and his idea is to join a side where he can feature regularly so that he can make it to the Tokyo Olympics with Spain in 2020.

With Vallejo struggling to find minutes with Nuno Espírito Santo’s side, he now has many opportunities to leave Wolves in January.