Thiago to Liverpool has gone relatively quiet over the past week. After initial big claims from Germany about a potential move to Anfield, there hasn’t been a lot added since.

Bayern Munich have accepted publicly that the former Barcelona player has a desire to leave the club, and they’re ready to sell him given his contract has less than a year left to run.

First, they need a buyer, and the asking price has been put at €20m. There have been claims Liverpool don’t want to go so high, and that would fit in a little with what Kicker are reporting today.

The German magazine states Thiago ‘would like to’ sign for Liverpool, which is natural given how attractive a prospect Jurgen Klopp’s side is right now. However, the Premier League champions aren’t moving forward for a deal right now.

Liverpool have registered their interest with the player, but must first ‘decide on the course of a Corona savings programme’. This could include exits, with Naby Keita put 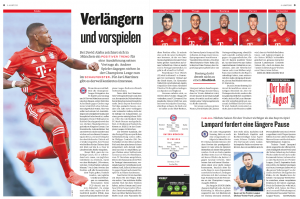 forward as a possibility by Kicker.

On top of that, Klopp’s side want to work out how Thiago would fit into the team, and they also have doubts about his age (29), and concerns about his injury record.

Thiago may be keen to sign for Liverpool, yet it would appear they’re holding back for now.