Steven Gerrard made it clear on Thursday that he didn’t think Rangers chances of signing Edson Mexer were very good.

The Scottish Premiership club were strongly linked with the central defender, but faced a battle against Bordeaux.

On Thursday, claims came from France that Rangers had offered the player a three year contract at Ibrox, however, the project at Bordeaux was very interesting and his preference was to remain in Ligue 1.

Later on Thursday it was announced that the soon to be free agent had agreed to join Bordeaux from Rennes, and that ended any slim hope Rangers had left.

Ouest France say the 30 year old (he turns 31 in September) was offered a four year contract, and subsequently accepted it.

That’s not to say he didn’t value the approach of Rangers, and especially of the Glasgow club’s manager.

Speaking to the French regional newspaper, Mexer said: “There was also Glasgow 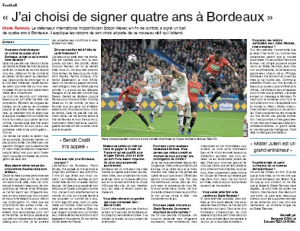 Rangers and I was very honoured that Steven Gerrard travelled to Rennes to meet me. As I was at the end of the contract, I wanted to listen to all the people who were interested in me.”

It’s a loss for Rangers, but a four year contract would have probably been a stretch for a player who will be 31 not long after next season starts.