It seems Portuguese midfielder Gedson Fernandes could be leaving Tottenham Hotspur before the end of his loan contract.

This possibility was revealed by Benfica president Luis Filipe Vieira, who was interviewed by RTP3 last night.

The official explained that Fernandes isn’t having many minutes at Spurs, and wouldn’t have room at the Eagles either. So he’d have a chance to convince manager Jorge Jesus, but is more likely to be loaned out once again.

It’s newspaper Record who comes up with the information, and it’s also covered elsewhere in Portugal. 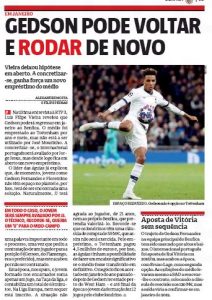 Gedson Fernandes joined Tottenham on a one-and-a-half-year loan deal back in January, in a move which includes a buying option of €50m for Spurs.

He’s only made 13 appearances for the club so far. This season, he was used by José Mourinho just once, in an EFL Cup match against Chelsea.

That makes it not only likely that Spurs won’t buy him at the end of the spell, but it also looks possible that they’d offload him back to Benfica in the January window.