The fact that Arsenal told Sassuolo they were ready to pay €40m for Manuel Locatelli has caused a bit of chaos in Juventus’ plans to buy the midfielder.

That’s because his current club are now pointing to that figure in order to get a deal done, which isn’t really what Max Allegri’s team were hoping for.

Sassuolo know full well that Locatelli isn’t keen on a move to London that might pay him better but would also mean missing out on Champions League football.

Despite that, they are ‘taking advantage of Arsenal’s offer in negotiations’ and are ‘asserting their rights’ to the fact he still has two years left on his current deal. 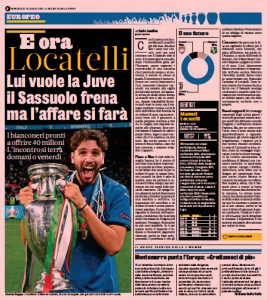 All this despite them knowing ‘the player keeps saying no’ to Arsenal’s offer, or rather ‘isn’t even even answering calls’.

That’s a stance from Gazzetta dello Sport, who report the news on Wednesday, have already taken, as they have previously hinted that Locatelli was ignoring contact attempts from the Gunners during the Euros.

That seems to still be the case, and it is a wonder as to why Edu Gaspar hasn’t given up yet.