On Tuesday we covered claims from Diario Vasco, a Basque newspaper, about Tottenham interest in Willian Jose.

Jose Mourinho probably needs a striker this month, and the Real Sociedad player was the latest on the agenda.

Today’s edition of Diario Vasco says the club won’t ‘give away’ Willian Jose, and that ‘unless Spurs raise their initial offer’ there’ll be no negotiations on a sale.

Tottenham’s initial offer is described as ‘formal’ and it’s ‘agitated’ those in charge at Real Sociedad. They’d been having a calm winter market, and then an offer turns up for their striker, with the knowledge he’d be difficult to replace in January.

The player’s buyout clause is €70m, and after suggesting on Tuesday that’s the figure the Basque club would want, Diario Vasco now say Real Sociedad have a policy of not ‘caging’ players if they receive an offer corresponding to their worth. 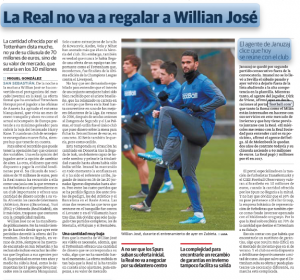 Willian Jose himself is said to have rejected several approaches from other clubs, but there’s a feeling Tottenham interest won’t leave him indifferent.

Interestingly, it’s now suggested Tottenham’s offer was very low. With the player value at €30m by the CIES Footbal Observatory, Spurs’ bid ‘wouldn’t reach half that’.

Out of any transfer fee, Real Sociedad have to give the Stellar Group agency 30%.

Mundo Deportivo also cover the situation and say Tottenham have made a ‘very juicy’ offer to the player, and his agent has told La Real about this.

Disagreeing with Diario Vasco, they say no formal bid has been made yet. Mundo Deportivo believe the player’s agents are interested in talking Willian Jose elsewhere, and that it’s therefore them behind this transfer situation.

From Portugal: Bruno Fernandes ‘already the king’ at Manchester United – Old Trafford ‘at his feet’

From Portugal: Bruno Fernandes ‘already the king’ at Manchester United –...

Midfielder ‘expected’ at Everton in summer – Toffees ‘appreciate’ him, tried...