On Thursday, we did an article on the Mattia Perin to Aston Villa situation, and everything looked rather promising.

It was explained talks to sign the goalkeeper had ‘developed in recent hours’, with Tuttosport even claiming he was ‘keen’ on the move

Gazzetta dello Sport on Friday, however, see it a bit differently.

The pink newspaper, while confirming the interest from the Villains is there, report that Perin ‘isn’t convinced’ with the first offer made by Dean Smith’s side and the whole situation is currently ‘at a standstill’. 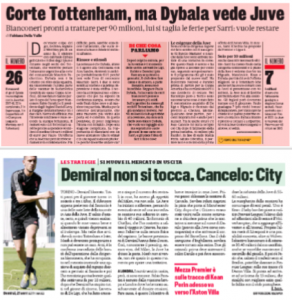 It seems that if Aston Villa want to bring in the Juventus shot stopper, they are going to have to up their proposal when it comes to personal terms.

Corriere dello Sport also cover the story briefly, but there’s no mention about a disagreement between the newly promoted Premier League side and the goalkeeper, merely stating the €15m price and hoping it has a better outcome than the previous failed move to Benfica.