In a press conference on Monday, AS Roma’s Gianluca Petrachi, the new director of football, addressed a number of matters, including the future of Nicolo Zaniolo.

The young attacking midfielder, who has attracted interest from both Tottenham and Juventus, is, at least publicly, not for sale, even if reports from the media seem to suggest otherwise.

Announcing their breakthrough starlet’s availability was never going to happen, and with the player expected back in training on Wednesday, we might end up with a bit more detail on what he wants.

Corriere dello Sport have a big article on the matter on Tuesday, and they try and provide as many answers as possible, which isn’t all that much.

The bottom line is that Roma have not received any worthy bids for Zaniolo, and until they do so, he remains their player. 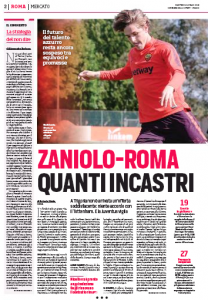 However, down Zaniolo’s end, things have changed a little, as he ‘hasn’t been left unmoved’ by the contract Tottenham put in front of him: six years with numbers higher than what Juventus or Roma are willing to offer him.

It’s said the player the ‘English theory’ has started to ‘intrigue him’, but the Juventus option remains attractive.

There’s a brief mention of Arsenal making a late attempt via Unai Emery, but if Zaniolo were to leave Roma, ‘he would prefer to play in the Champions League’, which (doesn’t entirely but) somewhat rules out the Gunners.

There’s a long way to go in this one still, if there’s even anything in it in the first place.