Barcelona supporters won’t have expected their club to be linked with Luuk de Jong this summer, but with Sport saying the Catalan side are looking for a ‘bargain’ striker then the Sevilla player becomes an option in the final week of the window.

Barcelona wouldn’t have a free run at the Dutchman, according to Sport, because the player has an ‘interesting offer on the table’ from West Ham, and there are also other clubs in the picture.

West Ham have been linked with multiple strikers during the current market, as seems to be a tradition for the London club, and if they want to make a signing before the window closes then the time has come to settle on the priority target. 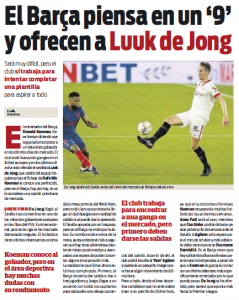 Sport are unsurprisingly of the belief that if Barcelona move for De Jong then he’d much prefer a switch there to signing for West Ham.