Earlier this month, Mundo Deportivo explained Tottenham Hotspur are still after Barcelona’s Carles Aleñá after they failed to convince him to join them in the summer.

Over the last week or so, we covered multiple reports from the same newspaper talking about Spurs chasing the midfielder, who has struggled to find regular minutes this season.

Those reports pushed the La Liga winners’ unwillingness to allow the 21-year-old to leave on a permanent transfer without inserting a buyback clause.

Mundo Deportivo journalist Miguel Rico once again relays there is ‘interest’ from Spurs in Aleñá, while giving an insight into Barca’s plans for January.

He claims the Catalan club will not bring in new players, but they will look to sell in the next window.  For this fiscal year, they plan to raise €124m from player sales.

It would be achieved if Bayern Munich decide to sign Philippe Coutinho on permanent deal for €120m. 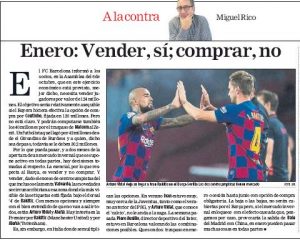 If not, they have to look at other options, which would be allowing a few of their midfielders to leave the club.

Aleñá is included in the list, along with Ivan Rakitić and Arturo Vidal.

With Tottenham interested in Aleñá, Barca’s plans for January could come as a welcome boost for the north London club.