Under certain conditions, La Liga clubs are allowed to make signings outside the window, if any of their players suffers a serious injury.

Ousmane Dembélé has picked up a serious injury and the Spanish champions have confirmed the forward will be out of action for next six months.

Monday’s edition of Sport states Quique Setién’s are waiting for authorisation from La Liga to make an addition outside the transfer window. It’s claimed there’s growing optimism at the Camp Nou that the outcome will be in their favour.

Ángel has ‘already given his yes’ to Barcelona and has informed Getafe president Angel Torres about his desire to join the Catalan club. The two sides share good relations, which is why the negotiations are already in place.

The player has a €10m release clause, but Barca believe a deal can be agreed for a lower fee. 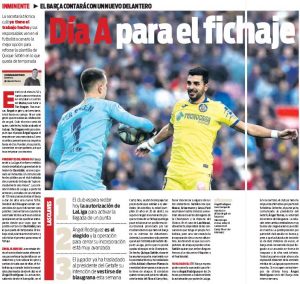 All parties are now waiting for La Liga’s medical council decision and if there are no complications, Ángel will be a new Barcelona player this week.

Sport adds Barca are hoping to complete the 32-year-old’s signing within 24 hours of receiving approval from La Liga.