Garry Rodrigues’ chances of getting a move to Newcastle United have been enhanced following his performance against Besiktas at the weekend.

The Cape Verde international was instrumental in Galatasaray’s 2-0 victory, and his performance would have impressed Newcastle United, who were in attendance at the Istanbul derby.

Rodrigues has seen his form drop in recent weeks, but was back to his best on Sunday, scoring the second goal for Galatasaray.

AMK Spor say Rodrigues was brilliant for Galatasaray and his performance will have pleased the scouts who travelled to Turkey.

Last week we reported this would be the last time Newcastle United would see Rodrigues this season, and the player may have increased his chances getting a move to the 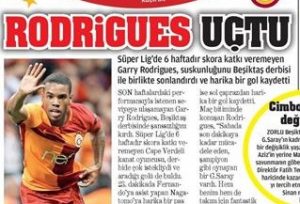 It’s expected Newcastle United will come in with an offer for the 27 year old after having bids rejected in the last two windows.

The Magpies will expect to face competition from Everton and West Ham United.