Home Europe Player impressed against Liverpool, just as advised, but no offer has yet...
SHARE

Just yesterday, we’ve covered an opinion piece from a Portuguese journalist saying Bruno Fernandes should impress Liverpool, in the friendly against Sporting, so he could get a transfer to the Reds.

It was said the midfielder should do like Cristiano Ronaldo did with Sir Alex Ferguson in 2003, and convince Jurgen Klopp to bring him to the Premier League this summer.

It’s fair to say Fernandes had a pretty decent match last night, scoring Sporting’s opening goal, and then making a nice assist for their equaliser in the 2-2 draw.

Now even though the past week has been full of rumours about his departure to England, what we see today are the newspapers saying Sporting want him to stay. 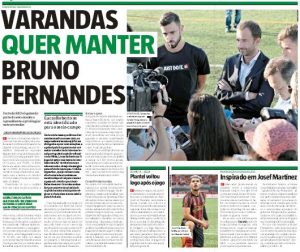 Newspaper O Jogo brings a story today titled ‘Bruno is Sporting’, explaining the importance the captain currently has for the club and the squad. They say his attitude has been an example, since he continues to have his body and soul at the club.

Meanwhile, Record has two articles. One is titled ‘The usual Bruno for English to see’, saying the midfielder had just one more of his great performances against Liverpool.

The other story says Sporting don’t really want to sell him. That’s because they only own a percentage of his rights, so it wouldn’t be worth losing such a good player to make something around €30m. 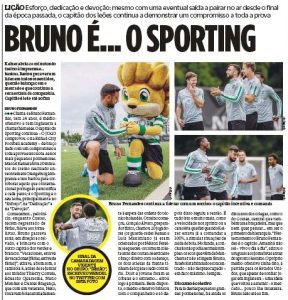 It’s also claimed that the Lions have already made him an offer to renew his contract, and once again, it’s made clear that no official bids have been made for him.

So with 14 days until the Premier League transfer window is closed, it seems Liverpool, Manchester United and Tottenham are still to make an move for Bruno Fernandes. That’s quite unbelievable, given the great form he’s been in.