We are approaching the end of the transfer window, meaning it’s about the time Tiemoué Bakayoko gets loaned somewhere for the season as Chelsea struggle to offload him permanently.

It’s been the same story for the past three years or so, and while there was a belief that, with his contract set to expire next summer, this would be the year he gets sold, everyone was once again proved wrong.

It appears Chelsea have already extended his deal by a year, and the player will be heading out on loan, away from Stamford Bridge, with Milan the likely recipients.

Both Gazzetta dello Sport and Corriere dello Sport state as much on Friday following a positive meeting between the player’s agents and the Serie A side on Thursday.

The former report Bakayoko is ‘impatient to wear the shirt again and to say yes’, and a lot will depend on whether Milan can accommodate his wages.

They explain he’s prepared to cut his salary from €3m/year post tax to €2.5m/year, which has helped ‘significantly’ in the chats with Marina Granovskaia, and the next few days should give us a better idea of what will happen. 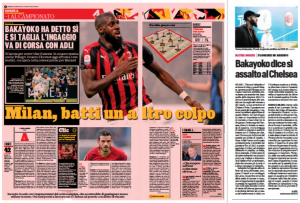 Paid €40m or so from AS Monaco, Bakayoko now only counts for around €13m on Chelsea’s books, which is why Milan will want the right to buy to be ‘around €10m’, with an agreement already reached on the €1.5m to be paid for the loan in the first place.

The many pieces in place ‘justify the substantial optimism of this operation’, which is corroborated by Corriere dello Sport.

They state Bakayoko’s ‘adventure at Chelsea is over’, and ‘the negotiation has advanced’ with hope they can close the deal ‘in the next few days’.