The La Liga winners are in desperate need of a new No 9 following Luis Suárez’s injury setback earlier this month. The Uruguayan will not be back until April.

Sport now claims Leipzig and Arsenal said ‘no’ to sanctioning Werner and Aubameyang’s transfer this month. Therefore, the Spanish champions are forced to look elsewhere.

Barca’s idea is to not spend a lot of money on a new striker in January. They would be willing to pay around €10m (presumably as a loan fee) and will also take care of the player’s wages.

Valencia’s Rodrigo is another target and the report adds Los Ches are ‘ready to listen’ for their forward. It’s also claimed the Spaniard is open to moving to Barcelona and his agent has communicated the same to his client’s employer. 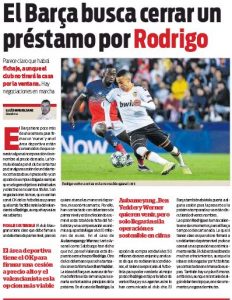 In the case of Rodrigo, Barcelona’s idea is to take him on loan with an option to make it permanent for €50m. If the Camp Nou side don’t exercise the option, Valencia will then sell him to the highest bidder.

Rodrigo is the ‘hottest’ option for Barca at the moment, but nothing has been closed yet.

Player on ‘top of list’ at Arsenal, has affordable release clause...

Man United DoF candidate has already ‘called upon the services of...