Chelsea have been linked with a handful of goalkeepers this summer as Frank Lampard doesn’t seem to be a big fan of Kepa Arrizabalaga.

That ‘s been made clear by Petr Cech, the Blues legend and the club’s technical and performance advisor, who told Sport.cz that Chelsea could bring in a new goalkeeper in the ongoing window, and Rennes keeper Édouard Mendy has been identified as one of the targets.

Over the weekend, reports in the British press stated Chelsea are set to return with a new offer of €20m for the 28-year-old after the Ligue 1 side turned down their initial bid of €16m.

However, in France, L’Equipe try to calm things down a bit by claiming the Senegal international is merely ‘attracting interest’ from the Premier League club at this stage.

In response to the bold claims of bids, it’s stated Rennes have so far not received any formal offer for him and have only seen ‘signs of interest’ from Chelsea. 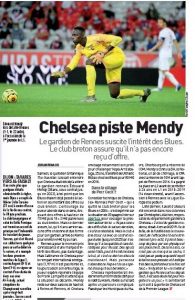 However, the west London club’s attraction for the goalkeeper is not ‘feigned’, and according to his entourage, Mendy is ‘hoping to join’ Lampard’s side.

Chelsea are considering the African’s profile to challenge Kepa for a place in the starting XI, but with Rennes ruling out any official bid for Mendy, a deal is unlikely to be concluded anytime soon.

Over at TuttoMercatoWeb, they state Rennes have ‘no intention of selling’ Mendy without having a replacement ready because the 2020/21 season has started in France.