On Wednesday, we brought you a report from Sport explaining Everton and Wolverhampton Wanderers have ‘asked about’ Rafinha.

It was also stated the Barcelona player is prioritising a move to the Premier League this summer.

The attacking midfielder has a year left on his Barcelona contract, which has a €16m release clause.

Sport on Thursday once again explain the 27-year-old’s desire is to move to England, and this will make it difficult for Shanghai Shenhua to sign him this summer.

The Chinese side are ready to pay the Brazilian’s buyout clause, but with the player holding out for a move to the Premier League, Shanghai Shenhua are finding it difficult to convince him for a transfer.

It’s claimed the Catalan club have so far not received any formal offers, but there’s interest in Rafinha.

The Toffees and Wolves are mentioned, and Sport add the two clubs have been ‘closely following the player’s evolution for a long time’. The newspaper further goes on to add the two sides ‘could make an offer’.

Barcelona want to recover €16m from the South American’s sale. The Blaugrana will wait for Everton and the Wanderers to decide on Rafinha, but not for long, because they want to sort his future out within in the next two weeks. 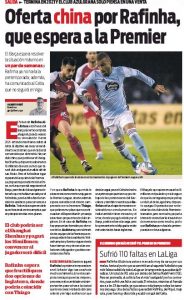 Rafinha ‘hopes’ that Everton or Wolves will convert their interest into an offer within the next fortnight, so that he can seal a move to the Premier League.