According to the Turkish newspaper, Ndiaye has reiterated his desire to leave Stoke City and he’s told the club’s hierarchy he wants to stay with Galatasaray.

It’s reported the Senegal international is targeting to stay at Gala for at least one more season following his loan spell with the Super Lig club, and has told Stoke City exactly that.

According to Fotomac, even if Galatasaray fail to land Ndiaye for next season the player could still leave Stoke City as he wants to continue his career elsewhere. 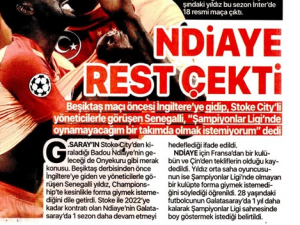 We recently covered comments made by Galatasaray manager Fatih Terim after he stated they want to keep Ndiaye for another 12 months.

The player himself has gone on record to say he wants to remain in the Super Lig due to Stoke City’s failure to get promotion from the Championship.