Turkish newspaper Fotomac report Liverpool winger Xherdan Shaqiri is on his way to Fenerbahce, after positive talks between the two sides this week.

We covered initial reports from Turkey which stated Fener are only willing to offer €1.5m a year in wages to sign the Swiss international, but Shaqiri’s camp are holding out for €3m.

However, according to Fotomac, both sides have had a positive meeting this week, with Fener said to be upping offer to €2m a season.

It’s reported that Shaqiri is edging closer to a move to Fenerbahce, but Liverpool’s stance on the transfer could cause problems. 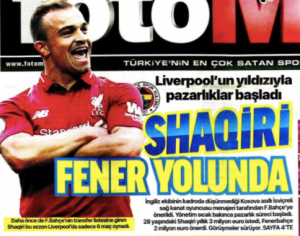 If both sides reach an agreement, Fotomac report Shaqiri will talk to Liverpool and ask the Premier League champions whether they can pave the way for his departure.

Although unlikely, the Turkish newspaper claim he could ask for his contract to be terminated with Liverpool and join the Turkish side on a free transfer.