‘Barça press to sign Wijnaldum from Liverpool’, reads a headline in today’s edition of Mundo Deportivo.

The Netherlands international has entered into his final year of contract and as per the claims, his future at Anfield is ‘not resolved’. He has become ‘one of the great objectives’ for Koeman, who managed the 29-year-old during his time with the Dutch national team.

Jürgen Klopp, meanwhile, has set sights on Bayern Munich’s Thiago Alcântara, who also has a contract until 2021 and has expressed his wish to leave the German club this summer.

It’s claimed Thiago has a ‘preliminary agreement’ with the English champions, and he could occupy Wijnaldum’s place at Liverpool, if the Dutchman ends up leaving the club.

According to the report, the ex-Newcastle United man’s signing would ‘not be very expensive’ for the Blaugrana, considering his age and duration left in his current deal. 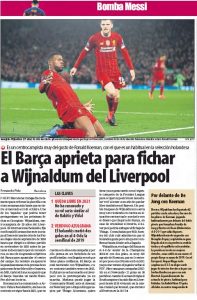 If Barca’s ‘interest’ in Wijnaldum crystallises, and if they end up paying a fee to Liverpool to acquire his services, Mundo then add, the Merseyside club could use the funds to ‘pay for the signing of Thiago’.

Barcelona sources have told Mundo they like the Liverpool player, without providing details on how far they are in their efforts to sign him.