Over the past few weeks, various reports from the Spanish press have named Manchester United as one of the firm contenders to sign Raphaël Varane this summer.

Two days ago, AS explained the Red Devils ‘sound the strongest’ to take the defender away from Real Madrid.

His current deal runs down in 2022 and he’s so far turned down renewal proposals offered by the La Liga side.

On Tuesday, Real Madrid confirmed Carlo Ancelotti, who has departed Everton, will be Zinedine Zidane’s successor.

AS on Wednesday explain the new manager has ‘many tasks pending’, and among them is to resolve the futures of Varane and Ramos. The latter’s contract expires at the end of this month.

It’s claimed the Spanish club’s ‘first intention is to solve’ the Varane case, now that they have completed David Alaba’s signing.

The centre-back thinks it’s his last chance to sign for another big club, and this is where Ole Gunnar Solskjaer’s side and Paris Saint-Germain come into the picture. The report states Varane ‘has offers from United and PSG’. 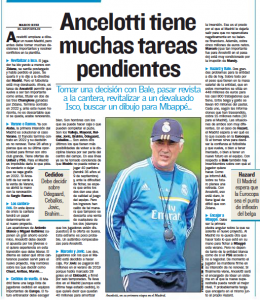 AS claim it’s ‘impossible for Los Blancos to meet his demands for an extension. Therefore, they must either sell Varane this summer or allow him to leave for free in 2022.

In the event Ancelotti gives the green signal for the Frenchman’s sale, the door will be opened to offer Ramos a new deal.