Arsenal’s chances of signing Philippe Coutinho have considerably improved, if claims coming out of Spain are to be believed.

The 28-year-old has spent this season on loan at Bayern Munich and will return to his parent club, Barcelona, as the Bundesliga side have decided against making the playmaker’s stay permanent.

The Brazil international has a supporter at the Emirates in the form of Edu Gaspar.

Edu was appointed as the Gunners’ technical director last summer, after his time with Seleção as their Team Coordinator.

Mundo Deportivo journalist Miguel Rico explains that with the ‘technical endorsement’ of Edu, the door to joining Mikel Arteta’s side is ‘more open’ than it was a few months ago.

Rico claims Quique Setién’s side ‘insist’ on selling Coutinho rather than letting him go out on loan for another season.

Mundo’s report doesn’t explain whether or not Arsenal are ready to meet Barca’s demands. 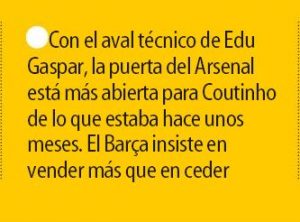