Home Europe Player has ‘discarded’ option to join Manchester United due to lack of...
SHARE

Two days ago, Mundo Deportivo explained Matthijs de Ligt has an ‘important offer’ from Manchester United and the 20-time English champions are ‘determined to spend a lot’ in signing the defender.

Wednesday’s edition of Sport once again talks about several clubs chasing the teenager and the Red Devils are one of the clubs who are interested in the 19-year-old.

Ole Gunnar Solskjaer’s side failed to qualify for next season’s Champions League and will play in the Europa League next season.

The Catalan newspaper claims the possibility of playing in the Europa League reduces the Old Trafford club’s chances of signing the player.

In addition to this, De Ligt has ‘discarded’ United because playing in the Europe’s elite club competition means a lot to him. 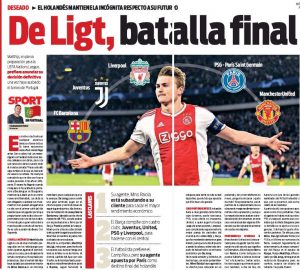 In the past few weeks, reports coming out of Spain have heavily linked De Ligt with a move to Manchester United, while reports in England have played down those claims.

Now, the Catalan media has joined the chorus in ruling out Solskjaer’s side in the race to sign the Ajax star.